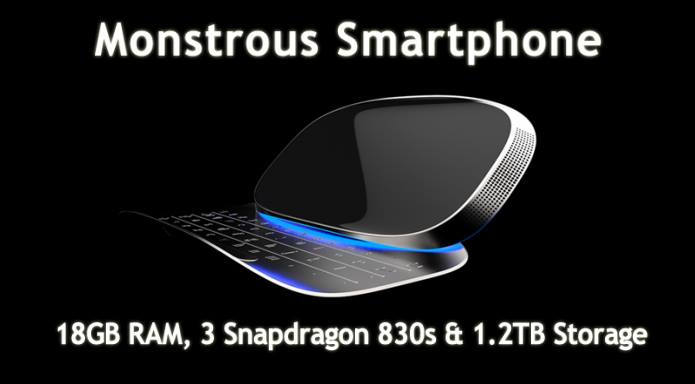 Turing Robotics Industries (TRI) with some more craziness after introducing the Turing Phone Cadenzalast week. The company has just announced the Turing Monolith Chaconne, a smartphone with specs even stranger than its name, through an email newsletter.

The above announcement by TRI come two months after the firm finally managed to ship the pilot Turing Phone, a crowdfunded Android handset, to early backers, after much delay and some revisions.

Coming to Turing Monolith Chaconne, let’s have a look at its specifications at a glance:

Steve Chao, CEO of TRI, in an email newsletter explains how it is going to connect the three Snapdragon 830 SoCs in the smartphone:

“TRI plans on connecting multiple CPUs via WiGig by implementing an ad-hoc driver to the 60GHz channel via on-board USB3.0. This complicated computing process stores a transient matrix in SSD of CPU(1), then it recomputes and shares the transient matrix with the other SSD of CPU(2) simultaneously. This results in the CPUs sharing their computing power in parallel. Such proprietary technology enables TRI to achieve never-seen-before computing power on a mobile device. So what exactly is this technology intended for? The answer is – Computational Intelligence (CI).”

The Turing Monolith Chaconne is expected to release in 2018. Whether or not will the company be able to launch this device next year and keep its promise, only time will tell. TRI also says that it will make its presence felt in Salo, Finland and start building prototypes for the Turing Phone Cadenza in a manufacturing facility right where Nokia and Microsoft used to produce their mobile phone prototypes