Late last month Facebook announced its worst-ever security breach that allowed an unknown group of hackers to steal secret access tokens for millions of accounts by taking advantage of a flaw in the ‘View As’ feature.

At the time of the initial disclosure, Facebook estimated that the number of users affected by the breach could have been around 50 million, though a new update published today by the social media giant downgraded this number to 30 million.

Out of those 30 million accounts, hackers successfully accessed personal information from 29 million Facebook users, though the company assured that the miscreants apparently didn’t manage to access any third-party app data 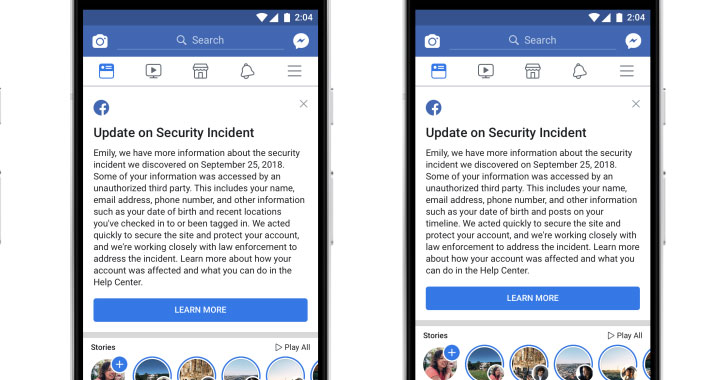 Besides this, Rosen also added that the attackers had no information to data from “Messenger, Messenger Kids, Instagram, WhatsApp, Oculus, Workplace, Pages, payments, third-party apps, or advertising or developer accounts.”

Moreover, hackers also were not able to access any private message content, with one notable exception—If a user is a Facebook page administrator who had received or exchanged messages from someone on Facebook, the content of those messages was exposed to the attackers.

Facebook said users can check whether they were affected by the breach by visiting the social network’s Help Center.

Facebook also added that the company will directly inform those 30 million users affected to explain what information the attackers might have accessed, along with steps they can take to help protect themselves from any suspicious emails, text messages, or calls.

So far the identity of the hackers remains unclear, but Rosen said Facebook is working with the FBI, the US Federal Trade Commission, Irish Data Protection Commission, and other authorities to investigate who might be behind the breach or if they were targeting anyone in particular.