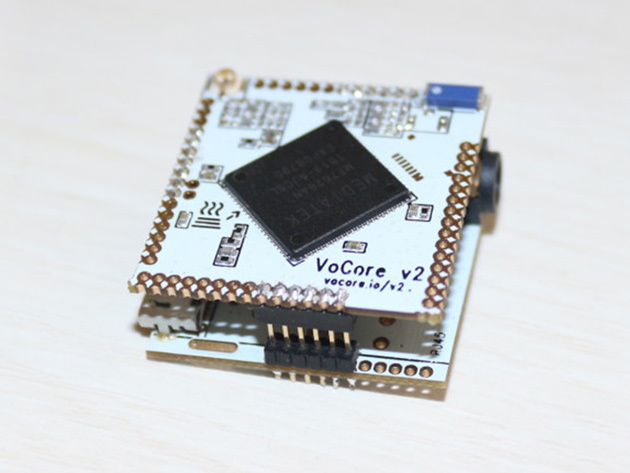 VoCore2 is an open source Linux computer and a fully-functional wireless router that is smaller than a coin. It can also act as a VPN gateway for a network, an AirPlay station to play lossless music, a private cloud to store your photos, video, and code and much more.it can be programmed in C, Java, Python, Ruby, Javascript etc. It can be used to store data in the SD card, as CCTV DVR system by adding a USB webcam, as a voice command system with a microphone, and so on.

The Lite version of the VoCore2 features a 580MHz MT7688AN MediaTek system on chip (SoC), 64MB of DDR2 RAM, 8MB of NOR storage, and a single antenna slot for Wi-Fi that supports 150MbpsAll this for $4.

Spend $12 and go for the full VoCore2 option and you get the same SoC, but you get 128MB of DDR2 RAM, 16MB of NOR storage, two antenna slots supporting 300Mbps, an on-board antenna, and PCIe 1.1 support.

Both versions of the VoCore2 have a power consumption of 74mA at standby, and 230mA at full speed. With this low power consumption, a small 9800mAh battery pack can power it for more than four days.

You can power the system from any power supply in the range of 3.2V to 6.0V. There’s also an optional extra dock that allows you to clip the tiny computer to another board that offers a headphone jack, USB 2.0 port and micro SD card slot.