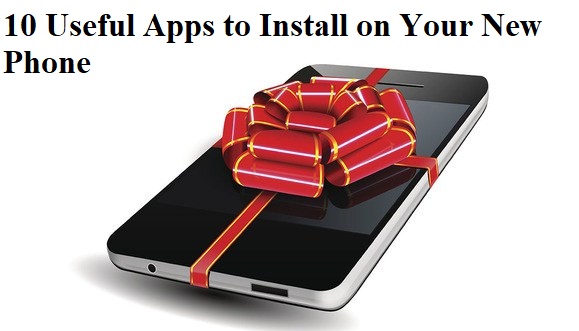 So you just got a new Android phone. You’ve probably turned it on, logged into a bunch of apps, downloaded your favorites — Facebook, Instagram, Snapchat, etc. — and logged into all of them as well. But now it’s time to dive a little bit deeper. If you’re setting up a phone for the first time, here are 11 apps worth downloading that you might have missed.

The rise of iCloud, OneDrive, et al might have taken some of the shine off Dropbox, which was the first app to properly handle syncing and cloud backup, but it’s still the best option for sharing files and moving them around between platforms, and of course for backing up your photos. You’ll probably want to fork out for 1TB of storage though, for $9.99/month.

We’ve got nothing against Apple Photos perse, but Google Photos works perfectly across Windows, macOS, Android, and iOS, and won’t cost you anything at all if you don’t mind a bit of resizing. Those considerations, plus all of Google’s smart image recognition and a few neat editing tools, mean it’s our default choice for managing photos and videos.

Humans are bad at creating passwords, and we’re bad at remembering things. Thankfully, there are password managers like LastPass. A password manager generates a unique, complex password for each site or app that requires one. When you need to log in, LastPass fills in the correct information for you. LastPass also securely stores your personal information so you can quickly fill out those tedious forms when you’re signing up for a service. It includes a way to safely share passwords with other people, even after you’ve departed this mortal realm.

What is there left to say about IFTTT (If This Then That)? Change your phone wallpaper on a schedule, turn your Wi-Fi off as soon as you reach the office, post to multiple social networks at once, get alerts about specific app price drops, launch Google Maps when you need to leave for a meeting, back up your iOS contacts to Google, and so on, and so on…

There’s very little to choose between this and Pocket but we’ve opted for Instapaper as the cleaner and more focused of the two. Anything on the web you don’t have time to read immediately, send over to Instapaper, and it’ll be there waiting for you in an ad-free, clean, clear, format that doesn’t make you want to throw your phone out of the nearest window.

Alright granddad—installing Word might feel like a step back in time but Microsoft’s mobile apps are more nimble than you might think, and having Word on board ensures you can view all those email attachments properly. Plus, if you do want to jot down some ideas or the start of the great American novel on the go, then Word is one of your better options.

CamScanner isn’t unique in being able to turn your paper documents into digital versions with a snap of your smartphone’s camera, but it is the best app we’ve found for the job: The smart crop and auto-enhance features just work, with the minimum of fuss, and if you stump up $5 a month you can get OCR text recognition plus a bunch of other extra goodies.

An app that really shouldn’t need any introduction, Google Translate is already very, very good at getting text, audio, and images translated from one language to another, and it’s only going to get smarter over time with Google’s AI improvements. Clean and easy to use, and with the option of caching some language packs for offline use while roaming as well.

Sleep Cycle isn’t unique in what it does, but in terms of support for both Android and iOS, and the straightforward way it operates, it’s hard to beat. You’re probably familiar with the idea, but if you’ve never tried it, give Sleep Cycle a go: It analyzes your sleep quality while you doze to wake you up at the most optimum time, based on your patterns of slumber.

Evernote’s star has waxed and waned somewhat across its nine year history, but we continue to love it for its cross-platform syncing, its flexibility, and the host of features that it offers, some of which you might have forgotten about—like handwriting recognition, presentation mode for the big screen, and easy note clipping from just about anywhere.